The Swim in Triathlon

When starting out as a triathlete I wouldn’t say I was particularly skilled in any discipline. Yes, I’d consider myself a good runner, but definitely lacking a lot of fitness and technique after all these years. My cycling was very limited in that I’d been riding a mountain bike for a couple of years but that was it. My swimming was definitely my weakest link, like most I’d learnt to swim when I was young and was perfectly capable, but my time was mostly spent paddling around on holidays and never in any sort of competitive environment.

As any triathlete will know the importance of the swim discipline varies greatly depending on the race distance. Arguably it is at its most significant in the Olympic distance (1500m swim, 40k bike, 10k run) as it becomes more of an endurance element. Technically as the distances are exactly half in the Sprint distance it should carry equal weighting but I don’t see it as so as 750m swimming is more of a well, sprint. In the ‘Ironman’ distances the swim is even more skewed, at Ironman 70.3 Staffordshire next year I have to swim 1900m, bike 90k and run 21k so as you can see most disciplines are double again over an Olympic apart from the swim which is ‘just’ another 400m.

A little over 12 months ago having just being diagnosed with a hernia, I rocked up at ‘The Pingles’ to meet many new friends at Nuneaton Triathlon Club. The lovely Vanessa took me, like so many before me, under her wing and guided me coughing and spluttering to the other end of the pool. Over the coming weeks I persevered and over time was able to string a few lengths together without stopping for a break, it even at times loosely resembled front crawl!! I starting watching various pro events on TV and as I always do was intrigued to see the speed/times they were swimming. Even now the 1:10 per 100m that the pros do in ITU events seems way out of my abilities and to be fair the fact that in Ironman races they’re doing under 1:30 per 100m for the 3800m is probably also beyond my capabilities 😀.

I didn’t spend much time in open water over the summer but went at least once a week. My biggest issue there is a psychological one, I need to get over my initial fear with the water as it often affected my breathing. Thankfully things were improving as the season ended so fingers crossed we start from where we left off next year!

I now feel like I can swim though… In my first race I swam 9:04 for the 400m pool swim, which is the sort of pace I now do as a warm up at a club session over the same distance or longer. I am now part of the BRAT Club and have a coached session on a Monday evening and through numerous drills, that hurt a lot at the time, I’m really starting to see improvements. As with most things, technique is key and understanding how all of the elements link together has been key. From the angle of arm entry, to the ‘catch’, the position of your ams as they pull through the water, the head position, the roll of the hips, the angle of the leg kick… it’s a lot tot take in when each stroke is over in about 5 seconds! As well as the coached sessions I spend a lot of time doing my own sessions from Sara McLarty’s excellent blog and also watching a lot of videos, particularly the Speedo ones:

At the moment my weakest link is definitely my kick, I’m persevering with the drills using fins, but my word do they hurt! I may be unique in that I am far slower when using fins – I can happily lead the lane doing everything else but drop to the back when we put the fins on – maybe having Size 11 feet and thus huge fins isn’t ideal!?

It’s clearly all working though as on Monday I was overjoyed to set ‘a new PB’ for 100m of 1:37… And that was near the end of a 2k set with lots of leg kicking drills! It may be the shortest discipline of the event and theoretically the least significant for me, but i’m enjoying seeing the improvements.

Thankfully the pool was much quieter today, I think arriving a little later – 7.15pm probably contributed to this. There were was me and 4 others in a double width lane and all bar one were capable swimmers (I seem to count myself in that category…)

I felt much better also, which I think I’ll put down to eating about an hour before. I don’t usually worry about nutrition in swim training sessions at the moment as I’m not exactly pushing myself, however based on this session even just a flapjack seemed to make a big difference. I felt able to keep going and at no point did I feel exhausted. I’m still doing my own thing with my training but focussing on technique and increasing my continuous distance. This session was sets of 100m with a break (length of my choosing) between each set and I did a total of 8 sets.

I mentioned in an earlier post that I was trying the Get Speedo Fit campaign, however it became apparent that even the warm up would be a challenge for me at this stage, as such when I feel I can complete that, I’ll start on the campaign.

In other news I got chatting to another guy who was beating himself to death by doing breaststroke with hand paddles – it looked hard work! He like me is more of a mountain biker and not convinced about his abilities at front crawl, he may come along to the triathlon club on Saturday!

Sadly Amazon failed once more to deliver goods on a date promised, so no finger paddles for me 🙁

As a result of the no show, I opted to create my own training plan using what I had already got and what I felt like doing. The kick buoy proved its worth as I used it for both kicking workouts and as a pull buoy, progress was glacial as a kick board as my kick technique is awful and needs work, but at least I had the opportunity to practice my breathing. Things were much more positive when used as a pull buoy; as I’ve alluded to before a major issue at the moment is my bottom half sinking in the water which exacerbates my other problems, I’m pretty sure this is in part due to the hernia. With the pull buoy in place I was comfortably able to swim 500m with only short breaks whilst waiting for a spot to clear in the rather crowded pool. All in all massive progress – I await to see what benefits the finger paddles bring…. If amazon ever deliver them!!

End result; my longest swim to date and by some margin the most comfortable.

As part of my campaign to improve my swimming I have signed up to the Speedo ‘Get Speedo Fit‘ campaign. This basically gives me some sort of training plan to work on, it also gave me the excuse to my some new goodies, which arrived today!

Tomorrow is my next swim session so I’ll be sure to try them out and see what they actually do! 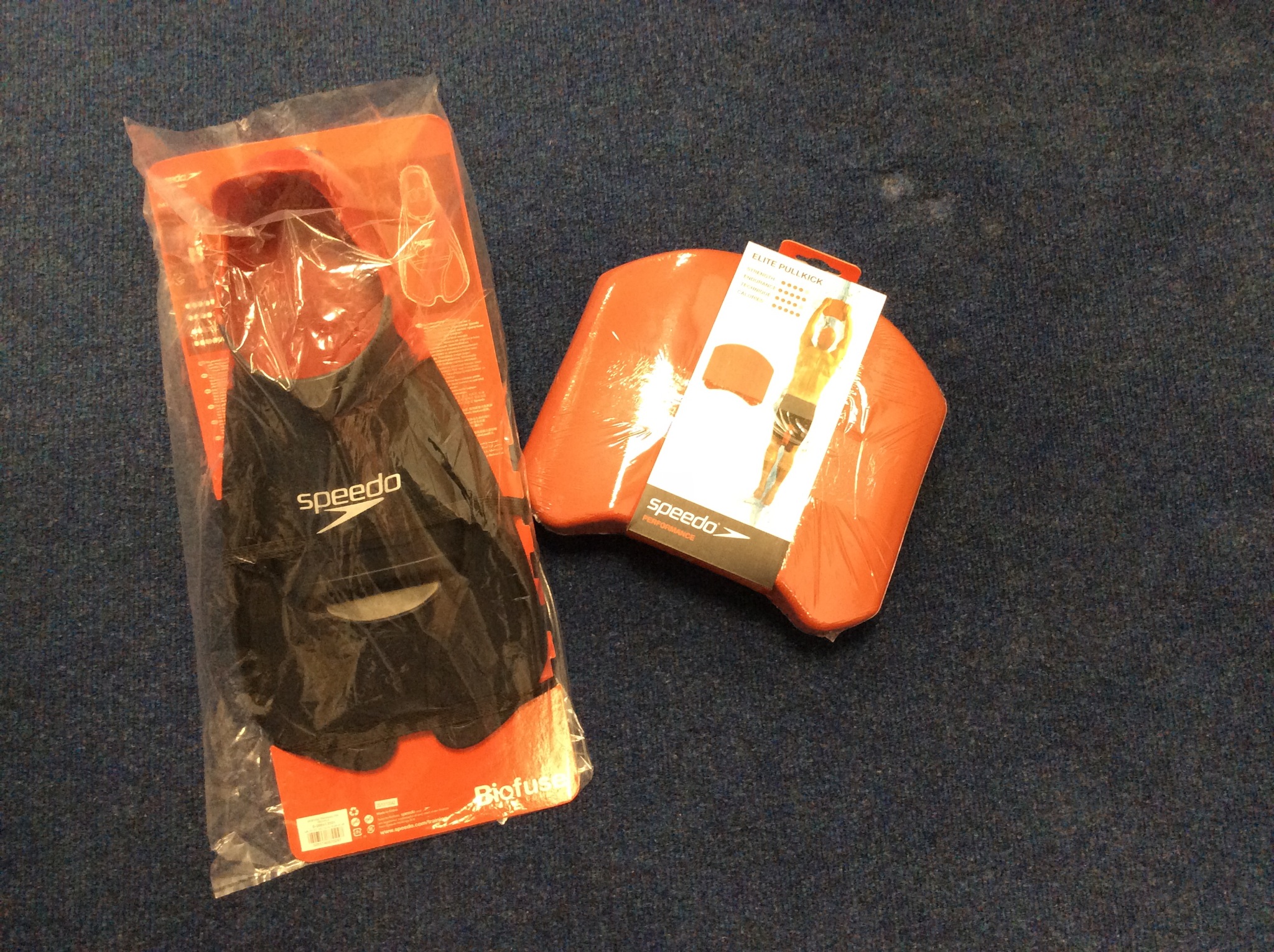 Another session on Saturday morning, mornings not exactly been something i’ve always been a fan of, but still 7.15am at the pool. Currently I train twice a week on my own and have one ‘club’ session, this helps me improve my currently very basic ability but also means i get pushed and learn a little about improving to actually compete.

As someone who swam a long time ago, when i started out the thought of being able to do 2 sets of 4x50m did not compute but despite feeling a bit sick and still struggling with my form I was pretty chuffed to actually succeed with the day.

My current biggest issue is most likely caused by the hernia as i find my form difficult to hold and consequently my legs sink in the water, as i get tired (happening quite quickly at the moment!) I also start to lose my breathing pattern and start to take on water – combine these issues and things go wrong quite quickly!

I have decided to follow another training plan on my own, following an email from Speedo, I will be attempting over the next month their ‘starter programme‘. This has meant buying some rather techie looking equipment: Speedo Biofuse Finger Paddles, Speedo Biofuse Fin Training Fin and i followed the suggestion from the training plan and knowing that I need to work on my legs and may need a float, i decided to save money and bag space and get a Speedo Men’s Elite Pullkick. Hopefully i don’t look like too much of an idiot when i rock up with this and nearly drown not long after!